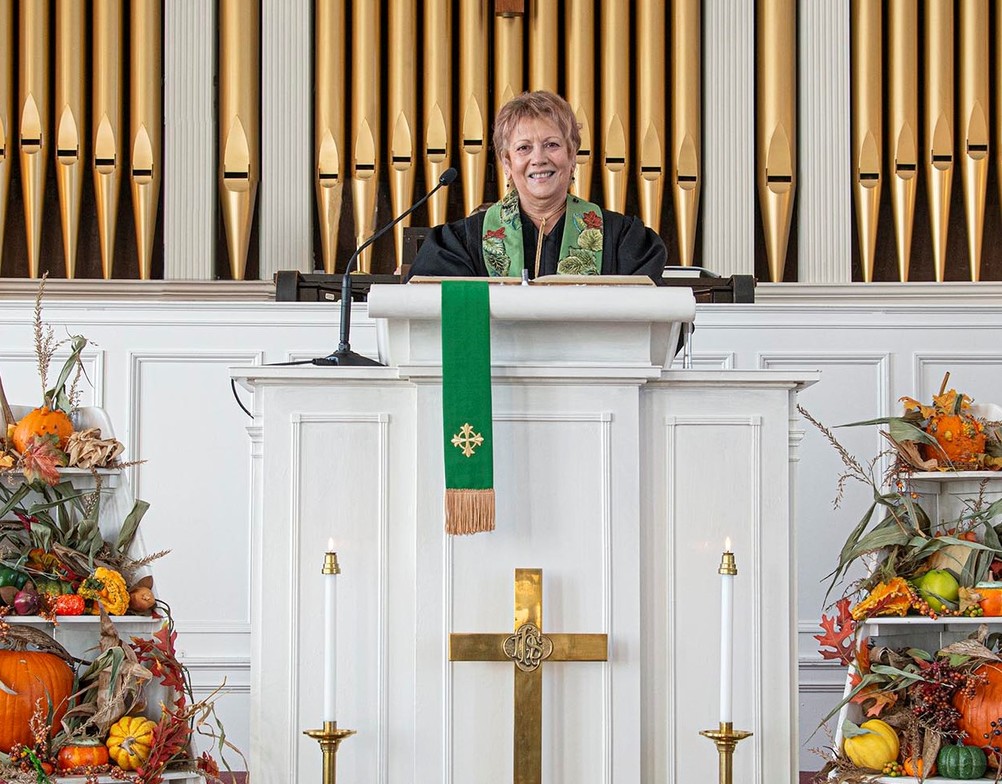 Chapter Two: Why Was An Intentional Interim Needed?

In the June Caller, we said that I would write a series of articles and relate how I came to be with you at Ellington Congregational Church. You can read Chapter One: The Very Beginning below. Here is the next chapter.

In 2001, I completed one year of basic education with the Interim Ministry Network, based in Baltimore, MD. It was required that the student work with a mentor once per week for a year. In addition, during that year, the student was expected to travel two weeks during that year (in my case, I went to Atlanta, Georgia twice) for an intense one-week study course with everyone else who was in the program. When finished, a certificate was given certifying that the student successfully completed sixty hours of Basic Education and a year of work with a mentor in the dynamics of Intentional Interim Ministry. I have also done additional study and keep honing skills. Something else that has helped me is the Stephen Ministry Leadership Training that I took in St. Louis, Missouri in April 2015.

Even if a church is not having any kind of division or
problems, the interim period between a settled pastor leaving and a new pastor coming provides unique opportunities for renewal. This is usually done by:

So you see, there are various potential pathways that you might take as a faith community with different emerging visions. An Intentional Interim Minister will help you to sort through these.

These are some ideals an Intentional Interim Minster strives to uphold with God’s help:

As I stated in chapter one: “CoVid has made the Intentional Interim Ministry work DIFFICULT.” My first steps were to learn to know the faith community, learn to know the dynamics of the Sunday service, and then talk with as many people in the faith community as possible to learn about any problems. I knew from Chuck Erickson (then, Interim Regional Minister before his retirement) that there was division concerning the vote for a new pastor. The congregational meeting was held by Zoom which was certainly not ideal, but necessary. Again, CoVid and the required isolation made certain steps necessary. The vote was 58 in favor of calling The Rev. Dr. Jay Terbush as ECC’s settled pastor, and 42 not in favor of calling him. When Chuck shared that news with me, I knew something was amiss. Votes like that just don’t usually happen; that is outside the norm and immediately a red flag goes up in an IIM’s mind. Also, per ECC, an 85% positive vote is needed to call a settled pastor. The Search team had done much work and prayed constantly in the work that they did. Needless to say, they were devastated and some still are feeling emotional and confused about that time. The Search team was formed right after the Visioning team completed their work. Again, the Visioning team did much work and prayed constantly. There is no easy way to say this and it must be said: Some on both the Visioning team and the Search team felt, and still feel, that they were disrespected and unappreciated. We will speak about this in the future.

Those of us in faith communities represent a microcosm of the world. We have all the problems and disagreements that plague the world. However, we are different in that we have chosen, as Christians in a binding covenant with God, to respect one another and each other’s opinions. We are all on our own spiritual journey, and concerning that spiritual journey, one thing that has been made clear by Christ Jesus is that we are commanded to love one another and our neighbor as we love ourselves. As I have said from the pulpit many times, we do not have to agree, we do not have to like someone’s behavior, but we are called (by the covenant with God) to love one another as children of God. We are commanded to agree to disagree in Christian love and to love one another as children of God no matter what else occurs.

I have attempted to give you just a bit of insight into the work that an Intentional Interim Minister is called to do and the work we need to do as a faith community. I would have to write pages and pages to give you a whole picture (which is still unfolding). Our next steps will include congregational meetings when everyone can be present without the fear of CoVId. I do not want to leave anyone out and ideally this work needs to be done in person with one another. We will live-stream for those whose health keeps them from attending. Then we will form small groups and meet in people’s homes if possible. We will discuss everything and then come together again in a large group. I will speak more about plans in the next few chapters.

What supplies the faith community and the Intentional Interim Minister with the courage and hope needed for this ministry is the promise that God’s Spirit is at work in all things.

Please know that I am blessed and honored to be with the ECC faith community. I have grown to love and respect all of you and the work you do in God’s name. I am available to you to answer any questions you have. Please call me or email and we will meet.

Chapter Three: Steps That Have Been Taken (Even with CoVid) and Looking to the Future

Your Sister in Christ,
Pastor Joanne

Chapter One: The Very Beginning

At the beginning of the last week in December 2020, Chuck Erickson, then the Interim Regional Minister before his retirement at the end of the year, gave me a call. He asked if I would take a Bridge Minister position with the Ellington Congregational Church until an Intentional Interim Minister was chosen by the Board of Deacons of the church. I was not actively looking for a position at the time because many things had occurred in our lives during the past year and a half (some while still working in a previous position). My husband, Andy, had triple by-pass surgery (pro-active thank goodness), Andy’s brother had died, and we had moved my mom up to Connecticut from Pennsylvania. We had been dealing with Andy’s healing, clearing out and selling houses, and getting my mom settled. However, for some reason, God opened my mouth and I said “yes” to Chuck. The Board of Deacons met and spoke with me by way of Zoom shortly after I said yes. They gave me their blessing.

I hit the ground running and began learning about things at ECC on December 29, 2020. Reverend Jay’s last Sunday was to be that next Sunday, January 3, 2021. My first Sunday to preach was January 10, 2021. This would be by way of recorded video that Brian Cocuzzo was so graciously and creatively putting together so the ECC community could watch on Sundays and remain unified as the “Body of Christ” while the church was closed because of CoVid. For all of you, this recorded service would be the only way you would know me for many months. As we all know, CoVid has made everything difficult.

The Board of Deacons, who were responsible for choosing an Intentional Interim Minister, had four profiles through the UCC from candidates for the position. One profile indicated that the person would not be “the right fit” for the ECC community; two of the candidates had already accepted other positions; one candidate was definitely interested and the Board of Deacons was interested in him. He had some issues to settle with his job before he could leave it and commit. He said he would pray about the position and get back to the Deacons, but that he was strongly interested. That is why a Bridge Minister was needed. It was necessary to cover the time between Reverend Jay’s leaving and the Intentional Interim Minster beginning the job. And so, I became part of the picture as Bridge Minister.

Some of you might remember that I did not go by Pastor Joanne, but by Reverend Joanne. This was because I did not want you to become attached to me as pastor; pastor would be the title for the Intentional Interim who would come to be with you. Well, the time that I was with you as a Bridge Minister was getting longer and longer. The Board of Deacons once again contacted the Intentional Interim candidate. He said he would get back to them in a few days. A few days later he called, gave his apologies, and said he could not accept the position. The Deacons were back to square one! They would have to get more profiles and begin again.

The Board of Deacons knew I was a trained Intentional Interim Minister and asked me if I would be interested in staying on rather than for them to begin all over again. Once again, God opened my mouth and I said, “yes.” I sent the Deacons my resume; they interviewed me; they looked at the work I had already done at ECC; they offered the position. That is how I came to be with your faith community. I then transitioned from being Reverend Joanne to Pastor Joanne. It certainly is a blessing to be with you.

Next Chapter: Chapter Two: Why Was An Intentional Interim Needed?

Your Sister in Christ,
Pastor Joanne

Subscribe to receive email updates with the latest news.